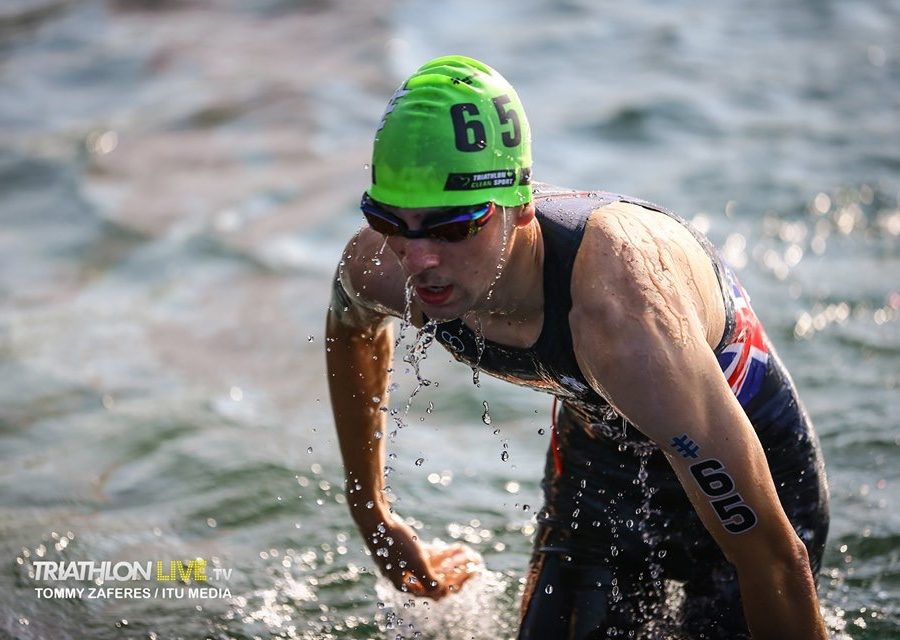 Toby Osman had agreed to ‘drop by’ Ripon’s Café Nero and chat about his year training and racing with the GB Junior Elite Team. Toby glides up and, effortlessly, transitions from bike to chat despite having just biked up from Leeds. Heads turn as he walks in – he could soeasily be part of the UCI World Championship happening the following week. Toby’s quite adamant he doesn’t want cake and insists on paying for his coke.

Toby, 19, and going into his second year studying for a degree in Sports Science at Leeds Beckett University, has trained, since childhood, with his local junior tri club – Ripon’s NYP TriStars. Last year he was selected to join the GB Team and has had, in his own words, an unbelievable year since, representing GB in three international races with the most recent – the ITU World Championships in Lausanne where Toby took the 3rd fastest 5km run split off the bike at a blistering 15 minutes 46 seconds!

Toby reflects on how lucky he is to have grown up in Yorkshire, which, over recent years has gained the reputation as an epicentre of triathlon excellence in the UK. Few counties offer the cycling experience of the Yorkshire Dales and coaching at the highest level supported through the state-of-the-art Leeds Triathlon Centre, a partnership between British Triathlon, Leeds Beckett, University of Leeds and Leeds City Council. The centre, now based within the

new bespoke Brownlee Centre facility in North Leeds, caters for over 60 athletes from University Teams all the way through to Olympic Medallists.

I ask Toby what it’s like being around the other GB athletes.

‘There’s a real sense of momentum amongst the athletes – everyone’s really supportive of each other.’ It is easy to imagine Toby rise to any challenge. Most critically, Toby has the ‘you are a very likeable guy,’ factor.

It’s the first opportunity I’d had to dig down into the kit of an elite junior triathlete.

‘What bike did you race on in Lausanne?’

‘Unfortunately, just the week before racing

I cracked the carbon on my own race bike and wasn’t able to get it repaired in time. Incredibly, Alistair (Olympic Gold Medallist) said I could borrow one of his! I had to get used to a different feel – and I’m quite tall – but an unreal experience.’

‘What would be your dream bike to race on next year?’

In my experience, cycling men of all ages, have thought about this.

‘I have many dream bikes at the moment but I’ll always love a nice Canyon or Colnago – but most top end bikes are pretty comparable so I’m not going to limit myself!’

At around £9k for a top end bike it can feel like money buys the all-important marginalperformance gains. I am surprised.

‘Do you mean you have to fund all your kit – the bike, wheels, helmets – the lot?’

‘Yes – at this level it’s up to us so it’s very important to focus on consistency and hopefully getresults and – hopefully get noticed and make it worthwhile for a sponsor!’

‘What do you consider the main challenges are for next year?’

‘Next year I will move up to the U23 category and some races will be Olympic distance – which is double what I currently race. I’ll need to improve my hydration and nutrition when I’m racing – it hasn’t mattered at sprint distance but racing Olympic distance it’s important Iget better at it – especially if I race in a hot climate. I will also be the youngest in a 4-year age category which now includes some of the top end WTS (World Triathlon Series) athletes such as my training partners – Alex Yee, Hayden Wilde and various others.’

Toby continues, ‘It’s amazing to train with the likes of Alex Yee – he’s very supportive – I feel really lucky to have athletes like that to chase! If you’d told me a year ago that in 2019 I would race internationally and train with such amazing athletes – I wouldn’t have believed it.It’s been mad!’

Toby is self-critical, pointing out his swim. ‘

In triathlon I have always been a weak swimmer in comparison to the top guys, so I’ve always come out pretty far back in the swim and had to work my way through on the bike and run. It’s only this year that I’ve had the taste of being near the front pack so I guess my mindset, wherever I am in the race, is just tick off as many people as you can.’ I’m impressed – he says it all with such a friendly manner you almost want to be ticked off.

‘How is swim training organised – is everyone together, male and female?’

‘Yes – we train together at the University of Leeds Edge pool. Jess Learmouth and Lucy Hall trash me at the pool. My swimming is where I need to improve so I can get on the front pack for the bike. In Lausanne I was knocked around coming up to the first buoy and pushed under – it was a bad situation – you never find your rhythm when that happens! My run is where I can do some damage. I had the third fastest run split in Lausanne but I couldn’t make up for not making the front pack on the swim.’

‘Do you get help to fund travel?’ I was interested in the level of support for young athletes who race internationally.

‘With GB Team events – travel and half board hotel are paid by British Triathlon. Lausanne was expensive but I managed on £80 for extras during the day! NYP Tri Club recently sponsored me with £500. I really appreciate the club supporting me in this way – it will help with race expenses and towards my kit and bike.’

‘How do you organise bike training?’

‘We find our own bike partners – rides out usually include a hard pull with some tough climbs like from Grassington to Otley. We usually do a technical session once a week at the Leeds Triathlon Centre. It’s a great place to perfect tight turns and transitions.’

Living in Headingly, Toby flat shares with other triathletes. I ask if he pays attention to his nutrition – his build is tall, bike mean and conditioned.

‘I was largely vegetarian during my A level year – I made bean burgers – but, unfortunatelyI’ve gone back to meat because we share the cooking in the flat. I’d like to specialise in sports nutrition during my final year. I’m especially interested in protein levels for athletesand whether the idea that athletes need a very high protein intake is true.’

‘What advice would you give to an 8 or 14-year-old coming into triathlon and to their parents?’ I was interested in whether Toby had focussed on triathlon from an early age, having come up through the NYP TriStars Junior Club.

Without hesitation Toby replied, ‘I would tell an 8 and a 14 year old to keep theiroptions open and try as many sports as possible before taking one too seriously. They’ll haveplenty of time to do serious training later on! And advice for the parent – just to let the kid dowhat sport they want. There’s no point in forcing them to train, there has to be intrinsic motivation from the athlete.’

‘My sisters and I started triathlon with the club when we were 7 years old – it was natural as my Dad coached at the club and my Mum ran at county level when she was in her teens. But it was by no means exclusive – I’ve been lucky – I had the chance to do pretty much any sport– even climbing – my parents encouraged me to try anything. I think that exposure to different sports is important for children.’ It’s a mature reflection and one that I didn’texpect from a 19-year-old.

‘What comes next now it’s the off season?’

‘Now it’s just time for me to get a strong winter in and hopefully get my swim time downenough that I’m a serious threat to the older guys. ‘

‘Will you move onto an indoor turbo trainer through the winter?’

Toby smiles with total not-a-fat chance conviction. ‘No! I’d much rather be outside – you can’t have a better location than Yorkshire for rides – I think riding out makes you technically sharper.’

‘Any other winter training goals?’

‘I’d like to take up cyclocross – if I can find an affordable bike! It’s a great sport forimproving technical skills and adapting to sudden power surges. Away from sport I enjoy mixing dance music although I don’t think I’m very good at it!’

Toby drains the last of the coke and we step out into the unexpected autumn warmth. Toby is impeccably polite – genuine and yet, somehow you are in doubt, there is only one thing on his mind. He swings his bike round and is off. I remember it is Tuesday and he still has a hard training set later that evening.

At ripontriathlon.co.uk we look forward to hearing from you. Our event has grown from listening to your feedback and our new website offers more opportunity for you to contact us and speak to each other than ever before. Remember you can also contact us on Facebook and Twitter. View our pictures on Flickr and watch our videos on YouTube.

If you have any general enquiries for NYP Tri or to ask for an announcement of the day please fill out the form below and click "Submit." We will get back to you as soon as possible.